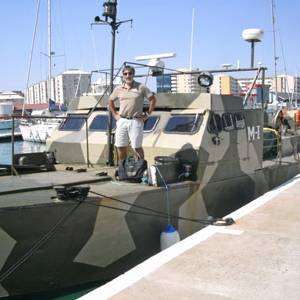 I doubt that Somali pirates off the Horn of Africa have ever heard of Boatshed Gibraltar although judging by the number of unique web views we get I would not be altogether surprised if they had.

Gibraltar is a great place from which to view the yachting community and all manner of famous yachtsmen from Joshua Slocum to Sir Francis Chichester have tied up at this impressive Rock. You see every type of craft here but the other day one, in particular, caught my eye. I hope our pirate friends are paying close attention as they’ll soon be getting a nasty surprise!

At a distance the “yacht” berthed alongside at Marina Bay looked like another rich man’s toy, a fast looking launch painted in grey disruptive pattern camouflage. Closer inspection reveals this is no toy but the real thing. Before me I see the privatisation of anti-piracy patrols. My admiring eyes get me an invitation to inspect the craft. This is not a plastic fantastic it’s a steel motor torpedo boat recently retired from the Swedish Navy. Crewed by a tough looking bunch of Ukrainians they are headed for the Red Sea via Suez. Their job is to provide shipping with a private anti-piracy escort. The superstructure looks hard enough to deflect Kalashnikov bullets and RPGs but what about offensive capability? The Ukrainian skipper assures me that they have no weapons on board but that is going to change before they embark on their patrols. He tells me the port where she will be armed and I think perfect! The craft called “Marshall 1” is capable of a top speed of 24 knots and has a range of 3000 miles. Her name is apposite as everything about this story smacks of the Wild West.

Any day soon I expect to read about a naval engagement between a private fast motor launch and a pirate skiff. I know who is going to win. This is a return to the days of privateers!

If you want a yacht of any description – except a fully armed anti-piracy patrol boat – then come to www.boatshedgibraltar.com 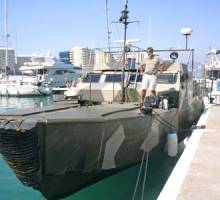 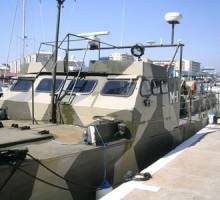