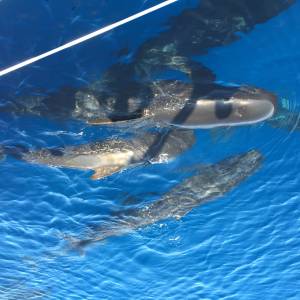 We could touch these majestic mammals.

A week ago we had one of those life experiences that we can hardly believe even though the photographic and video evidence is there for all to see. Sailing from Saidia Marina at the eastern end of Morocco to Gibraltar on a 30 hour passage we came across a pod of 22 Pilot Whales. It was early afternoon on the second day with very light winds and a flat sea. We had been motoring the last 4 hours as the wind was not enough to push us along fast enough to not have to spend another night at sea.

It is not the first time that I have seen Pilot Whales in the Straits and Western Med but this time something very special and unique happened. When I first spotted the pod I alerted the crew to come on deck to view as I closed on the pod. I expected them to move away and disappear. I had always thought them to be shy creatures. One of the crew members suggested that I turn off the engine which I did. What happened next was incredible. The pod swam towards the boat led by a very large male. The yacht was surrounded on all sides by the whales. The air was filled with the reassuring deep breathing sound of these large and majestic mammals. We could also hear their birdlike chirps. We quickly lowered a waterproof GoPro camera over the side and managed to get some great shots of these wonderful creatures in their own underwater environment. As the whales swam alongside they would sometimes rotate so that they could look up at us on the deck. I wonder what they made of us humans. We only deserve their disdain after centuries of merciless hunting. We reluctantly parted company after an hour. I sensed that the whales would have been happy to stay with us for longer but we still had another 10 hours of passage making to complete.

The experience left me with wanting to know more about these hitherto shy creatures. A few minutes of research on the Internet revealed the following. Pilot whales can be found in oceans nearly worldwide, but data about current population sizes is deficient. The long-finned pilot whale prefers slightly cooler waters than the short-finned, and is divided into two populations. The smaller group is found in a circumpolar band in the Southern Ocean from about 20 to 65 Deg S. It may be sighted off the coasts of Chile, Argentina, South Africa, Australia and New Zealand. An estimated more than 200,000 individuals were in this population in 2006. The second, much larger, population inhabits the North Atlantic, in a band from South Carolina in the United States across to the Azores and Morocco at its southern edge and from Newfoundland to Greenland, Iceland, and northern Norway at its southern limit. This population was estimated at 778,000 individuals in 1989. It is also present in the western half of the Mediterranean Sea.

This season we were also privileged to see a pod of Fin Whales but a distance of several hundred metres. The increasing frequency with which the crew of Citadel is encountering whales gives me hope that conservation measures are finally resulting in a recovering of these magnificent creatures. If you want to see some of the photos and videos of our encounter with the whales go to www,Facebook.com/boatshedgib. If you “like” this page you will receive news about the sailing world in your Facebook timeline. 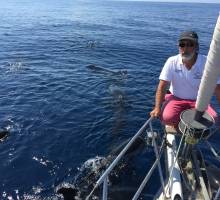 I couldn't resit a selfie with the whales.