Boatshed Gibraltar
What The Yacht Did Next.
Sunday, 11 May 2014

What The Yacht Did Next. 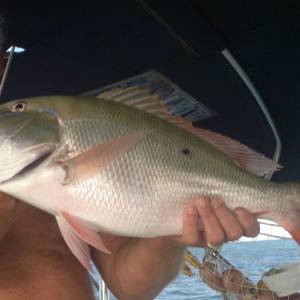 From yachtsman to fisherman!

The pleasure of being a yacht broker is in the interesting characters that can move in and out of your life. These characters come to Boatshed Gibraltar looking for a yacht in order to realise their dreams. Helping someone achieve a lifelong ambition is hugely satisfying, although sometimes there are lingering doubts about the feasibility of their plans.

When I first met Craig and Wendy I was struck by their enthusiasm and zest for life. Craig had spotted an extremely well priced and well equipped Jeanneau Sun Odyssey 49 on the BoatshedGibraltar.com web site. Their plan was simple; to acquire a boat and set off on a circumnavigation. Craig is a very open individual with a deep curiosity about everything. He is is not embarrassed to ask questions. I learned that his current boat was a 27 footer in which he had explored the English Channel and Northern French Coast. He was now looking to buy a boat almost twice this size. The Sun Odyssey had equipment one would never find on a smaller boat and Craig constantly asked questions about everything, the boat, local sailing conditions, tax implications, everything. Only the ignorant are afraid to ask questions and so they tend to remain ignorant. Craig was having nothing of this. He had already co-opted a crew with the right skills for an initial passage back to the UK.

In February 2013 after their inspection and survey they decided to acquire Baraonda. A few short weeks later they left Gibraltar bound for Poole. I wondered whether the dream would end in the UK because not all such dreams are realised especially ones as ambitious as their planned entire circumnavigation. I didn’t have to wonder for long because Craig is an avid “Whatsapper” and from the moment he turned right at Tarifa I got a running commentary on Baraonda’s progress. There was a tinge of envy that I wasn’t with him although he had invited me to help crew the yacht back to the UK. His enthusiasm and love for his new boat turned Wendy into a boat widow, but not for long for Wendy is part of the big plan. Once in the UK Craig set about preparing Baraonda for the rigours of a circumnavigation.

There followed a temporary silent pause in the Whatsapp pings until early one morning in September 2013 the phone by my bedside vibrated with Craig announcing that he is about to enter the port of La Coruña. The adventure was underway! Baraonda had been fitted with an AIS (automatic identification ships) transponder so I was able to verify on MarineTraffic.com that he was just off the north west corner of Spain.

A few days later he pings me again to tell me that he has entered a place in Lisbon that carries my surname the Doca d’Alcântara. He’s had a fast passage down the Portuguese coast and is even more in love with Baraonda. He can’t believe that he’s had her flying along at up to 13.5 knots in very big waves. He tells me he’s doing his best not to scare Wendy but I think it takes more than wind and waves to scare this lady! He remembers that 20 years ago I lived in Lisbon so once again he is seeking advice on things to do and places to eat. I recommend the trendy Alcântara Cafe in the Lisbon docks area and a visit to the Royal Palaces at Sintra.

My next contact is on the 19th October. He announces that he has made it to Lanzarote in the Canaries. He is learning that the trade wind route involves a lot of downwind sailing and will need a spinnaker pole to hold out the genoa to stop it from collapsing when the boats rolls around in the following seas. If anything Craig is determined and eventually manages to acquire a pole in the Canaries.

On the 6th January this year after spending a couple of months in the Canaries Baraonda arrived in Cape Verde islands and are now ready for the big crossing. But that’s a story I would like to continue next month. 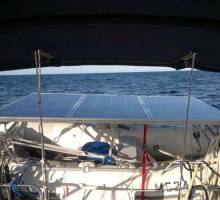