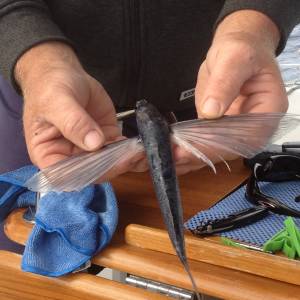 The yacht, Baraonda sold by Boatshed Gibraltar in February 2013, has been up to the UK and down again to Spain and Portugal. We pick up Wendy & Craig’s story as they prepare to set off across the Atlantic after spending New Year 2014 in the Cape Verde Islands.

It takes what the British politely call pluckiness but the Spanish call “cojones” to launch yourself across an ocean for the first time on a boat you have owned for less than a year. But then Wendy & Craig are no ordinary couple. Their favourite quotation is from Mark Twain and it says everything you need to know about them: “Twenty years from now you will be more disappointed by the things that you didn't do than by the ones you did do. So throw off the bowlines. Sail away from the safe harbour. Catch the trade winds in your sails. Explore. Dream. Discover”.

On the 6th January they departed from the Cape Verde island of São Vicente, destination Barbados. They had already made their way along the route down through the Canaries and Cape Verde islands and were about to be alone again with over 2000 miles to run to Barbados. On their first day at sea they cover 170 nM averaging around 8 knots. Slowly they settle down to their watch-keeping routines and discover that they do in fact have company. Tens of dolphins put on a display of exuberance on their first day out. From all accounts the flying fish (a dolphin delicacy) tried to take refuge on Baraonda and every day they found dead or dying flying fish on the decks on the yacht.

Midway through the first week at sea they encounter three days of flat calms. It’s a great opportunity to catch up on lost sleep and do some fishing. Craig is a dab hand with the fishing gear and soon lands a Dorado (Mahi-mahi). These large fish put up a good fight and when first landed (or should it be boated!) they shimmer in a beautiful gold colour. Craig catches enough for lunch and dinner and to stock up the freezer.

On the 13th January the mood changes and dark ominous clouds appear. Over the next few days the seas are less comfortable but the wind has returned and they are on the move again. On the 16th January they have gone past the midway point with 999 nM to run to Barbados. They re-assess the wisdom of making Barbados their landfall in the Caribbean and instead decide to head for Guadaloupe. They are making good progress but sometimes the long days at sea can be intensely boring. This feeling is aggravated on the 22nd Jan when at 3am the autopilot packs up. From now on they will have to hand steer. This is very tiring and ties up one of them constantly at the wheel. Luckily at this point there are less than 100 nM to go. On the 23rd Jan they spot Guadaloupe on the horizon and start to receive mobile phone signals enabling them to send messages to friends and family. They have conquered the Atlantic! I get to hear from a Whatsapp message with an image attached of the ship’s log. Since leaving the Canaries they have covered more than 3000 miles and average 9.5 knots across the Atlantic getting the boat up to speeds of over 15 knots. I love knowing that some of the yachts I sell get to sail the Seven Seas - well done Craig and Wendy! 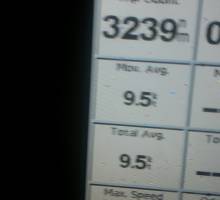