What makes a Classic Yacht? 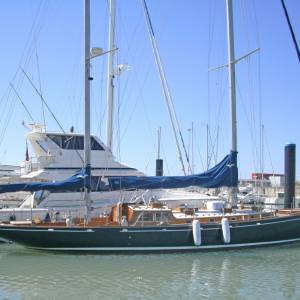 There are boats and then there are yachts with interesting histories.

What makes a classic? It’s not so much the age but where she’s been and with whom that marks out a classic. She doesn’t even have to be beautiful, although it helps.

A country with a fleet of classic yachts, like the UK, sends out a signal to the world that it cares about its history and maritime legacy. The maintenance of this legacy is a responsibility shouldered by private owners who are passionate about their boats.

At Boatshed Gibraltar we are proud to have several exceptionally beautiful classics. Take the Costantini St Philibert ketch once owned by Alain Bombard.

This yacht was commissioned by Bombard. For those of you who do no know the "Bombard Story" here is the outline:

On October 19, 1952 Bombard began a solitary trip across the Atlantic for the West Indies. He had sailed in the Atlantic Ocean solo before, but had planned to sail across it with a friend, English yachtsman Jack Palmer, but Jack abandoned ship in Tangier. Bombard sailed in a Zodiac inflatable boat called l'Hérétique, which was only 4.5 metres (15 ft) long, taking only a sextant and almost no provisions.

Bombard reported that he survived by fishing (and using fish as source of both fresh water and food) with a self-made harpoon and hooks and harvesting the surface plankton with a small net. He also drank a limited amount of seawater for a long period on his trip. On the 53rd day of the journey he encountered a ship. The crew told him that he was still over thousand kilometres short of his goal. However, after the ship's crew offered him a meal, Bombard decided to go on. He reached Barbados on December 23, 1952 after 4,400 km of travel. Having lost 25 kg he was briefly hospitalized. He published a book entitled "Naufragé Volontaire" about his trip in 1958.

After that Atlantic crossing his new 18m ketch must have seemed like dying and going to heaven. This classic yacht exudes history and classiness from every pore.

Bombard died in 2005 after a long career in business and politics.

If sailing is not your cup of tea then a beautiful 23m Parker Motor Yacht is another classic on our books. This yacht hails from another era. It was once owned by a playboy count but sadly the stories of his adventures cannot safely be put into print. This boat needs a new lothario.

We also have a classic sailing yacht once owned by notorious pop star and a motor yacht, with bar, once owned by Oliver Reed. Does anyone remember the lovingly restored 1917 wooden “spitzgette” that once sailed the Straits of Gibraltar? This beauty is also for sale.

Whether it is classic yacht or a weekend boat you’re looking for Boatshed Gibraltar will be happy to help. You can find us at by clicking here 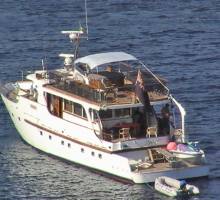