Transiting the Straits of Messina. 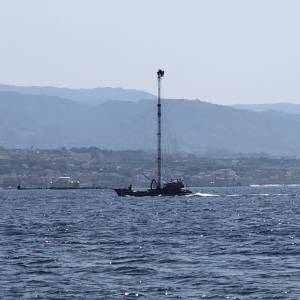 After our volcanic fireworks and overnight stay at the anchorage at Stromboli we headed for a two night stay at Lipari island south of Stromboli and just north of the Isola di Vulcano. It's a delightful spot with lots of lovely restaurants and cultural attractions. I guess the fact that it doesn't have an airport subjects it to less tourist pressure.

We are on a mission however and our objective now was to head south towards Sicily to transit through the fearsome straits of Messina. The pilot book was very specific about using the the times of high and low water (yet all based on the tide times at Gibraltar, apparently being the closest Standard Port!). It advised against trying to run against a foul tide that can run at up to 4 knots at Springs. When three miles from the traffic separation zone boundary we informed Messina VTS of our intentions because there are reports of heavy fines for failing to report. They were courteous and helpful as we hugged the eastern coast dodging the ferries that cross between Messina and Regio di Calabria every few minutes. It was a relief as the Straits opened up. They are 1.5 nM wide at the narrowest point. It is through these narrow straits that swordfish migrate in the summer making them prey for the highly specialised swordfish fishing boats. These boats are controlled from the top of a 20m plus gantry from which the swordfish are spotted. The boat is then manoeuvred over the fish for the harpooner to spear. The harpooner sits out on an equally long bowsprit. These improbable but fast craft are allowed to operate freely within the traffic separation zone and are an additional hazard for navigators in the area.

Our destination is the port of Taormina in the shadow of Mount Etna. As we entered the bay at Taormina a RHIB approaches us with "George" offering secure mooring buoys at €80 per night. He informes us that he has just slashed prices from today (1st Sep) by 50%. Thanks but no thanks George, we decided to drop anchor in the bay where in the event we spent three nights sampling the delights of Taormina and the beautiful Alcantara Gorge in the foothills of Etna. The wonderful Taormina experience was slightly degraded by the massive cruise liners that disgorge thousands of tourists onto its narrow cobbled streets.

If you are ever in Taormina don't miss the opportunity to go swimming or canyoning in the crystalline waters of the Alcantara Gorge. You can get there by bus from Taormina bus station. Our next destination is Syracuse where we will up the crew numbers from three to six. 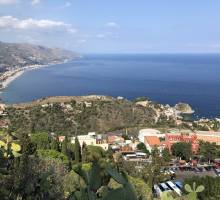 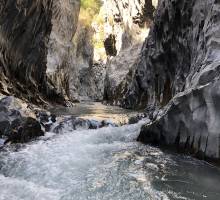