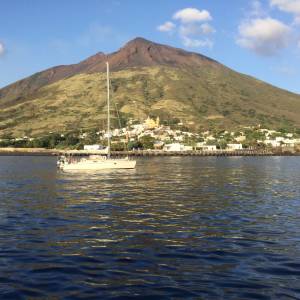 We had stood on the edge of the Isola di Vulcano crater to admire the steam and hydrogen sulphide gas emanating from its guts but it seemed a timid volcano. From the top of the crater we had spied the much more active eruptions of Stromboli some 25 nM to the north. So after two nights at the western anchorage we heaved anchor in the early evening with the intention of sailing to and drifting off the western coast of Stromboli to see and hear Stromboli's throaty eruptions.

The wind was very light so once again we had to motor. We left the island of Lipari to port and then headed east of Panarea. All these islands have volcanic origins and are surrounded by rock pinnacles so you have to carefully thread your way through. Thank goodness for GPS chart plotters which are accurate to within 5m! Remember however that they can be fallible so don't rely on GPS and back it up with some visual pilotage. The island of Panarea seems to be a favourite of the super rich judging by the size of the yachts that were standing off this island.

At around midnight we arrived off Stromboli and closed to within 1nM. There are green buoys marking the safe zone from the edge of the lava field. Soon after our arrival we were treated to a display of Strombolian fireworks. The volcano makes a roar which sounds like a jet engine as it ejects the lava. My biggest regret is that without a good camera and stable platform it is impossible to capture the long aperture timings required to produce decent photos of the eruptions. You have to imagine them if I describe a plume of red hot rocks and orange lava flying into the air at speed accompanied by an awesome roar. There are only so many "wows" you can verbalise without trivialising this awesome display of nature. After 90 minutes we moved slowly towards the north coast where an underwater ledge provides the only anchorage around the island.

As we closed the anchorage we were mesmerised by the tens of twinkly lights in the sky only to realise that these were the anchor lights of the yachts at the anchorage. We quickly slowed down to orientate ourselves and try to find a space to accommodate Citadel. After a while tiptoeing our way quietly through the boats at anchor we decided to anchor astern a large, well lit super yacht that provided some protection and illuminated Citadel against the charcoal black sky.

Before going to bed we verified that the yacht "Wanderlust DNA" belonging to Darren and Alex was also in the anchorage. We were carrying registration renewal documents for Darren and weeks earlier in a casual conversation about where to post the documents to we realised that we would both be in the same area at the same time. We agreed to link up to handover the documents in person. Boatshed Gibraltar provides registration services for yachts on the Gibraltar Part 1 Red Ensign Registry. In this case a very personalised service.

In the morning after a quick breakfast we visually identified "Wanderlust DNA". Once again we threaded our way through the busy anchorage to come close enough to the port aft quarter of Wanderlust so that one of my crew dangling from a stay and the guardrail managed to hand over the envelope. Darren was so impressed with Boatshed Gibraltar's personalised delivery service that he may want to repeat but this was definitely a unique encounter!

With our delivery done we set course for Lipari. We felt entitled to a couple of days in a marina as we had now been either sailing or at anchor for 6 days and we needed some Italian cuisine topped by those marvellous gelatos.

By the way did you know that a yacht does not even have to come to Gibraltar to be registered? If you are interested in registering a boat in Gibraltar then you can find our contact details at www.boatshedgibraltar.com. 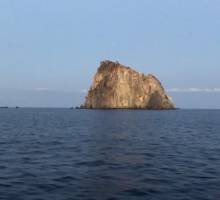 Rock pinnacle above the water. 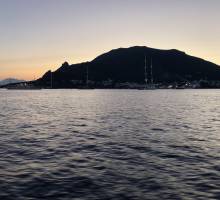 Passing east of Panarea in the evening.