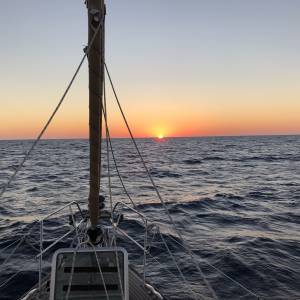 Sunset on the last day.

During the night of the 19th to 20th Sep it rained heavily. We awoke to find we were afloat on a sewer. An evil mix of effluent and rainwater had emptied into Porto de Empedocle's harbour. It was time to leave. We agreed that breakfast underway was infinitely preferable to spending another minute enduring the evil smell which had some of us gagging involuntarily.

The forecast was not great. The advice MeteoGib had given us was to delay departure until the 22nd by which time a developing medicane would no longer pose any risk. Over the previous 24 hours I had sifted through every possible weather source. We concluded that we would encounter winds of up to 35 knots near thunderstorms but not more. We came to the conclusion that it was better to go sooner because a Mistral was also forecast to develop in the Gulf of Lyon in the next 4 days with waves of up to 6m predicted for the Strait of Gibraltar for the day of our estimated arrival. Better to make a run for it in the narrow window that was available now.

On the first day we did a lot of motoring along the southern coast of Sicily. Ominous, tall, grey cumulonimbus clouds were visible over land with many lightning strikes. By nightfall we were off Marsala at the westernmost tip of Sicily. The massing clouds had gone from few, to scattered, to dense as we headed for the open sea. I can only describe the scene as a forest of thunder clouds. During the next 48 hours we endured a rough, wet and uncomfortable ride as we headed west heavily reefed down. During the first night the radar proved its worth helping us to chart, and therefore sometimes to avoid, the worst of the rain squalls that barreled out of the dark towards us. Lightning seemed to be everywhere lighting up the high clouds into what seemed like monstrous figures. I can see how the ancients developed their myths about sea monsters. Dawn brought some relief but it was grey and black all around. Some warm porridge helped to settle queezy stomachs.

The wind speed was averaging 25 knots with gusts to 35 coming from the southwest. As the day developed the weather conditions remained the same but the wind started veering west. We were being headed. Hour by hour we were being driven away from our westerly course so that by afternoon we were on a northwesterly course and progress towards our objective slowed considerably. We knew that as we transited through this big depression the wind would eventually come from the north west and then north. In the early hours of the second night we decided to put in a tack from port to starboard. There were squeals of delight from the navigation table as we realised that we could make Gibraltar on this same tack. Easing the sails into a close reach Citadel accelerated to 8 knots. During the night the thunderstorms became less dense and by dawn the sky turned from overcast to broken. We spotted a warship on the horizon some 50 miles north of the Tunisian coast. We soon identified it as a British type 45 destroyer and as she passed within 2 miles of us the red dragon painted on her bows identified her as HMS Dragon. The sight of HMS Dragon was uplifting for the British crew of Citadel and we celebrated the end of stormy weather and good progress with a cooked breakfast.

For the next 2 days we made excellent progress running parallel to Tunisia and Algeria. The bright lights of Algiers became clearly visible on the fourth night at sea. Up to this point we had not seen any sea life (though a lot of plastic). The Mediterranean is dying or dead! I am used to sailing in the Strait of Gibraltar which is alive with fish, birds, dolphins and whales. As we head into the Alborán Sea I know we’ll soon be visited by dolphins.

It was a great pleasure but no surprise to run past a pod of Pilot Whales. They kept up with the boat for a minute but this lot aren't half as energetic as their dolphin cousins. The evening of the fifth day we approached the Spanish coast near Almería. By now the wind has gone from north to east as predicted. Running before a wind that is starting to run out of puff is slow and uncomfortable. The engine is required for the next 12 hours until we are virtually at Gibraltar.

The iconic Rock rises slowly above the horizon like a wonderful mirage. No matter how fast you move towards her it is never fast enough. Why is it that the last few hours of every passage become so frustratingly long? At last we arrive and our wonderful boat neighbour Karen hands out unexpected cups of tea and bacon butties to us on the pontoon! Six days at sea - we are home! 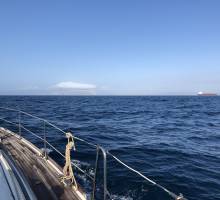 The Rock rises above the horizon.