Boatshed Gibraltar
Sailing with the Goldstars
Wednesday, 15 May 2013 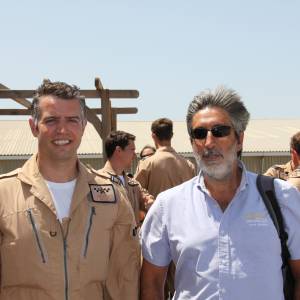 After a briefing we watched a landing.

Goldstars is the nickname of RAF 31 Squadron. The Goldstars have been in Gibraltar for a week with their Tornado GR4s. Boatshed Gibraltar had the pleasure of inviting nine pilots and navigators for a day's sailing. The link up was serendipitous but as a former Acting Pilot Officer in the University of London Air Squadron it was an unique opportunity to meet these Top Guns and talk about a career path I never took.

The first thing you notice about these guys is that they are smart, polite and curious. A couple had RYA Day Skipper qualifications and those who had no previous experience more than made up with bags of enthusiasm and curiosity. They have all served in either Iraq, Afghanistan or both places.  Two are former Harrier jump jet jockeys.

The weather forecast for Saturday was for a 10 knot south westerly ideal as an induction to sailing. In the event the wind speed  mid-Strait was soon hovering around 30 knots. Heavily reefed down and we were still powering to windward at 9 knots. Needless to say we got thoroughly wet but the strong July sunshine  soon had us drying. We eventually took refuge and dropped anchor in Getares Bay where we spend a very pleasant couple of hours doing what most young men do effortlessly - drink beer!!

They wanted to know about sailing and yacht brokerage and I was hungry to learn about what it's like to fly a thunderous machine line a Tornado. Let me share what I learnt.

Eight Tornado GR4s have deployed to Gibraltar for what is called air combat training. Although the GR4 is a ground attack aircraft in extremis it has to be able to defend itself in air to air combat. To do this pilots clean up their aircraft  by jettisoning bombs and external tanks to make their aircraft lighter and more agile. Over the past week Gibraltar has reverberated as Tornadoes take off in threes with full re-heat. One pair (Voodoo 1 and 2) simulate a bombing run while Monster 1 (their radio call signs) pounces on them in a mock attack to test their dog fighting skills. This work is hard and the G forces exhausting.

The field in Gibraltar is a little short but the welcome they have received and great weather more than compensate. These machines land and take off at 160 knots and need max thrust to get airborne when fully loaded hence the afterburners. At cruise they burn 40kg/min of fuel.

There are two exercise areas in international airspace East and West of Gibraltar they are easy to get to and air traffic is light so it creates the conditions required for training.

The eight aircraft have arrived in Gibraltar by flying over Portugal and then East into the Straits.  Spain does not allow British Military aircraft to overfly her territory if their destination is Gibraltar. It's a strange attitude from a NATO ally!

I discovered that the eight aircraft deployed to Gibraltar are backed up by 136 RAF personnel and 40 containers of spares, tools and test kit. I was lucky to have met the aircrew. I think we enjoyed each others' company and there is talk of them returning next year. If they do Boatshed Gibraltar will only be too happy to organise another sail. On Wednesday I have been invited to get up close and personal with the aircraft at the RAF base. I can't wait it's my birthday!! 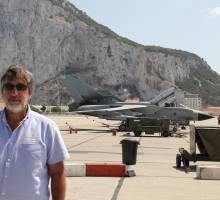 We got a great description of the aircraft and its role. 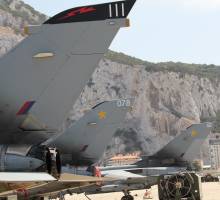