Portugal’s Tallest Mountain is out mid-Atlantic. 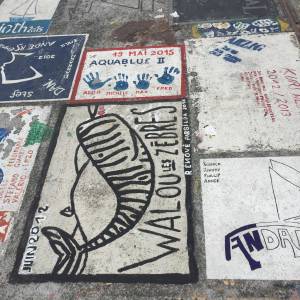 Continuing my account of the trip to The Azores from Gibraltar:-

Mike and Kim left us over the weekend and we are now joined by Rob and James as replacement crew. On the Monday afternoon we bid goodbye to Ponta Delgada and head out towards Horta on the island of Faial. James is being dropped in at the deep end as not only is this his first sailing trip but it will also includes an overnight passage.

As we head west some 5 miles from Ponta Delgada we spot a pod of pilot whales. Cameras click away as everyone tries to get that perfect shot but the whales are camera shy and they make life difficult for the photographers. Just before sunset we spot a lone whale. It’s big. As soon as it clocks our presence it dives and disappears. It’s just under the surface as its presence distorts the smooth surface of the sea. A few minutes later it surfaces astern of Citadel. James captures a great shot and then announces with some authority that it’s probably a Bryde’s Whale. He has obviously been reading the books in anticipation of the trip. The rest of us nod in ignorant agreement!

A couple of hours into the passage and in complete blackness we start seeing the loom of a lighthouse that we conclude is on Terceira (so called because it was the third island of 9 to be discovered). The wind has dropped to inky black calmness so we motor on through the night picking up the lights of Sao Jorge. The wind picks up again towards dawn so we decide that we will sail up the Sao Jorge channel between Sao Jorge and the island of Pico. As the day breaks we can pick up Pico’s coastline but her famous volcano remains shrouded in clingy clouds.

Mid morning and the hot August sun manages to burn a hole in Pico’s shroud to reveal the impressive sight of the 7,700 foot mountain in the mid-Atlantic. Did you know that this is Portugal’s highest mountain? I didn’t. As soon as it appeared it vanished once again and for the rest of the day it teases us with brief glimpses of its impressive form.

The wind picks up at the western end of the Sao Jorge channel. I wouldn’t want to be here in a full gale because Pico’s volcano accelerates the wind round its edges. Reefed down but making good progress we are soon making a beeline for Horta. We are keen to get ashore and sample the delights of the island of Faial. Once safely tied up in Horta with all the paperwork completed we head for Pete’s Sports Bar. This is the Mecca for ocean cruising yachtsmen, adorned with flags of hundreds of yachts that have stopped at Horta on an Atlantic passage. At the yacht basin there is a real sense that this isn’t one of those Mediterranean marinas crammed full of gin palaces and unused sailing yachts. There isn’t a gin palace in sight - most don’t have the range to motor more a thousand or so miles into the Atlantic. It feels good to have got here. This is our furthest point west. Next month I’ll tell you about our return passage to Gibraltar.