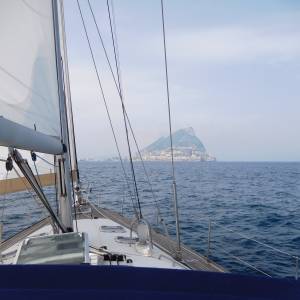 Foggy conditions build in the Straits.

On Wednesday 3rd January 2018 the Gibraltar Chronicle carried a story headlined “Top life-saving award for local pensioner”. It was a heart warming story but dig deeper and there was a catalog of appalling errors and poor seamanship waiting to be discovered. Let us learn something from these shortcomings.

The story describes how the pensioner was returning to shore on a foggy morning when he heard a whistle. He steered in the direction of the sound to discover a sailing yacht with an elderly couple who had been adrift in the fog all night. This brings me to the first point. Why did the yacht not formally declare an emergency with an appropriate Pan Pan call on VHF channel 16 the designated marine distress frequency if this was the case? Given that the yacht was unable to move under its own engine power a flat battery is surely a part of the equation. A yacht of this size would generally carry separate engine and service batteries that can be cross connected so that the engine can be started from the service battery. Why this was not done is a mystery. Perhaps the seaworthiness of the boat left much to be desired. It is always advisable to carry a handheld VHF transceiver with its own battery separate from the yacht’s power system. Had the yacht declared an emergency this would have no doubt triggered a response from the Gibraltar Port Authority (GPA) who are responsible for search and rescue in local waters. Instead the pensioner who eventually took the yacht in tow made a mobile phone call to the GPA. All radio and phone traffic is recorded by the GPA but the Chronicle article leaves us in the dark about the nature of this call. Without invoking a distress situation maritime rescue authorities will not assume the role of breakdown service. When you put to sea you really need to know what you are doing and how to deal with emergencies.

The crew of the yacht were lucky. According to the article the pensioner (the rescuer) had no navigation aids other than a compass and a mobile phone (again no marine VHF radio). Why would anyone ignore weather forecasts and the evidence of one’s eyes and head into fog with such limited equipment? It is lucky for the yacht that he was out there when he should really have stayed in port. Mobile phones may operate at sea but only at very close ranges. It is not a substitute for a marine frequency radio set. Had the crew of the yacht monitored and transmitted on channel 16 and 12 they would have obtained situational awareness of the other vessels in their immediate vicinity and could have made an “All Ships” broadcast warning other vessels of their predicament.

The rescued yacht was a sailing yacht. In other words it had an alternative mode of propulsion - wind power. All the RYA courses teach budding skippers how to come alongside under sail power. Indeed I have had to do this in my own yacht when my engine broke down.

We were also told that there was a danger of the yacht floundering (sic) on rocks. Well if he could not sail due to becalmed conditions there was certainly the option to drop anchor and hold off any rocks. It seems that this was also not considered which begs the question of whether the vessel carried an anchor and sufficient chain?

In summary the crew of the yacht were lucky to have been heard by the pensioner, who should have stay at home on that foggy morning, but a more professional approach to seamanship, safety and yacht maintenance would have completely obviated the need for a long and risky tow. I always tell purchasers of yachts when they ask me what qualifications they need (the answer is none) that they would do well to do an RYA yacht handling course because it is always much better to be here wishing you were out there than being out there wishing to be here. An appropriate RYA boating course will teach you how to make those decisions and how to recover from awkward situations.

If anyone reading this has doubts about their own boats I suggest they check out their batteries, their sails, their anchor, and most especially their radios and knowledge of procedures.