Horta to Gibraltar via Ponta Delgada 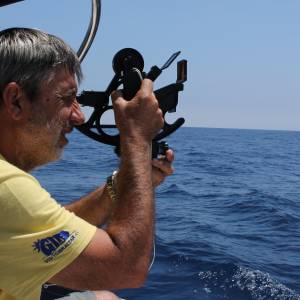 Thank God we had GPS as backup!

Continuing my account of the return trip to The Azores and back from Gibraltar:

We had thoroughly enjoyed our visit to Faial and Pico but now it was time to return to Ponta Delgada for a few days to re-provision for the return trip to Gibraltar. Our departure from Horta is made on a dull, sullen afternoon. We have planned an overnight passage and head east with Pico’s southern coast on our port side. There is a lovely 12-15 knot breeze out of the south that promises a comfortable beam reach all the way to Ponta Delgada. The crew search diligently for whales but this time there are none to be seen.

Just before sunset Rob and James disappear into the galley and emerge 45 minutes later with a delicious lamb stew. Now that our steering and autopilot have been fixed we can all sit around the cockpit table to enjoy this stew in grateful silence. James jumps up from time to time to scan the horizon for blowing whales. We soon settle into the agreed watch system. Citadel is ploughing forwards in slight seas with all her sails out doing 7/8 knots. As soon as the sun disappears it’s pitch black. Pico and Faial have long dipped below the horizon. The sky is shrouded in clouds and there are no visible stars. We are in a darkened cocoon the off watch crew are asleep and the night light is on down below. Occasionally a wave breaks over the bows which lights up in red and green as the spray engulfs the navigation lights on the pulpit. At around midnight the moon rises above the horizon. This combined with a clearer sky means we can now see a horizon although there is nothing to be seen. This peaceful calm perhaps epitomises what sailing can mean to those that love it. Less than 20 hours after leaving Horta we have Ponta Delgada’s harbour entrance in sight. An hour later I am standing in the marina office seeing the marina manager, Customs, Immigration and Border Police. I have arrived from another port in Portugal but they rather like their bureaucracy!

We now have three days to say goodbye to Rob and James and await the arrival of another James for the passage to Gibraltar. James (the second) arrives at midnight on the Saturday and promptly learns that we plan to leave at noon on Sunday for the passage back to Gibraltar. The crew are now keen to head home. We estimate that the return trip to the continent will take the best part of a week. With full fuel tanks and all the bureaucracy completed we set off at around 14:00. The winds are light and flukey so we motor on and off for several hours in search of the north easterly breeze that we know is out there. It’s been promised by MeteoGib who is providing a weather routing service. Depressingly we also learn that the easterly Levanter wind has been blowing in the Straits since soon after we left Gibraltar. This is going to complicate out final hours into Gibraltar. However the Straits are nearly a thousand miles away and if the north easterlies don’t make an appearance soon we are going to be out here longer than we expect. On the evening of our second day out the northerly shows its face and we are soon romping along at eight knots. Well into the night the wind freshens and we need to take in a few reefs in the main and genoa to be able to maintain control. By morning the spray is reaching the cockpit and he are all in our oilies getting unwanted showers of cold Atlantic seawater. We now start a period of three days with winds of 25 knots gusting to 30 knots. The seas start to heap up. We are soon in a swell of 2/3 metres. A couple of us are decidedly queazy in the middle of the night. We unwisely dispensed with cooking by heating a couple of tins of “Fabada”. The chorizo and beans make several appearances over the course of the night. Reaching to retch over the rail is frustrated as safety harnesses pull us up just short of the target. The cockpit and decks are kept spotless by the waves that break over Citadel. It’s miserable! By morning the sun appears and the clouds exit west and two delicate crew members lie on deck wishing an early death. However the sun works its magic and over the next few hours they recover. The winds continue to hover around 30 knots and Citadel is at times galloping along sometimes touching 10 knots. Occasionally Citadel falls off a wave and shudders into the trough. The bashing is punishing for the boat and tiring for the crew. Spirits are kept up by the thought that every hour we are getting closer to Cape St Vincent.

With a crew of four we had decided that crew members would be on watch alone in three hour stints giving a 9 hour break period. This worked very well. James at over 70 is the oldest crew member. This is his first blue water experience. He is very quiet. I don’t know whether it’s fear or wonderment. He has his video camera out at every opportunity. I guess he thinks they won’t believe his stories when he returns to his native Scotland. He’ll have the video evidence!

We are now approaching Cape St Vincent and have to pay close attention to commercial traffic taking the shortest route to and from Northern Europe. The AIS (automatic identification ships) allows us to see and be seen as we head parallel to, but out of sight of, the Algarve coast. The wind eases and starts to head us as we move towards the Gulf of Cadiz. The easterly Levanter is making itself felt the closer we get to Cadiz. It becomes clear that we are going to have to motor the last few hours of this adventure. In the western Straits the easterly generates large waves they seem to come after 7 or 8 “normal waves”. It must be the result of large easterly waves setting up an interference pattern as they push through the narrow Straits. We are surprised as the boat rises up these very steep waves with ease.

On this last night I did not sleep a wink. It was probably the excitement of looking out for the Tarifa lighthouse and feeling responsible as we closed on a shore that I know well. After a very long night we arrive off Tarifa in the early morning and motor up through the northern side of the Straits and into the Bay of Gibraltar. At around 11:00 the mighty Rock of Gibraltar emerged from a very hazy bay. A hour later we were alongside at Queensway Quay Marina. Citadel had covered over 2000 miles and visited three islands in the Azores. It felt very good.