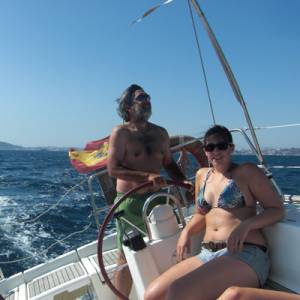 Dubbed the most sociable yacht rally in the world this year’s event set off at 13:00 on Friday 18th June with virtually no wind. The starting line was set between the RAF runway centreline buoy and a Royal Navy vessel. This year the Navy sent a RIB instead of a gunboat so someone at the MOD is already taking the budget cuts seriously!

It was a chaotic start with some forty becalmed yachts and power boats manoeuvring to be on the line for the starting gun. Some skippers will need to review their knowledge of the collision regulations for next year! Despite a few close calls there were no actual “contacts”. Within 30 minutes a south westerly breeze had sprung up providing a great sail into the busy Straits of Gibraltar. Midway across the Straits the wind was at times reaching 20 knots providing an exhilarating reach to Punta Almina just East of the Spanish enclave of Ceuta on the Moroccan coast. The yacht “Andrea Noveno” ,a Beneteau Oceanis 473 chartered by Boatshed Gibraltar , was an especially happy boat when it was surrounded by tens of dolphins in mid-straits. This was an infectious happiness as these marine mammals apparently inspected and frolicked around every yacht in the fleet. Past Punta Almina the yacht “Tomboy” bore down on the “Andrea” and unleashed a broadside of water bombs with devastating accuracy. We will remember!

By the time the bulk of the fleet had arrived at the Port Smir reporting berth the wind had freshened into a strong and very gusty breeze providing more than enough excitement for skippers who had to berth up safely in the confined waters of pier 3. With the wind continuing to increase into the evening it was decided to postpone the traditional welcome barbecue by 24 hours. In the event it was a very sound decision.

The next morning hardy sailors formed up into shore parties to explore the souks in Tetouan and M’Diq. There is something about Morocco that is both exciting and alluring. I did not see anyone return from these expeditions loaded down with any “special price” carpets. This skipper did reject some offers to trade some of the female crew for herds of camels or goats. I think the Moroccans find it quaint that we manage with just one wife when they seem to juggle up to four. I find it hard to understand how boats would ever get sold with four wives saying “No”!
Saturday afternoon was time for sports on pier 3. Tug-of-war, Grand National and all manner of other party games organised by a deranged individual in a wig! The sea survival game in which crews had to clamber into a liferaft in a timed trial provided great spectator sport. The young lady who provided the spectacle, a member of my crew, would like it to be known that she never expected to be pulled into the liferaft with such dispatch!

The games afternoon took a short drinking pause as the crews scurried back to their boats to get into their fancy dress outfits for the fancy dress barbecue. I counted several Roman Legions, three Greek Goddesses, a boat full of pirates, a rabble of Vikings, two transvestites and three guys in a camel outfit complete with a guide who was offering 10 Dirham rides around the marina. It is around now that your correspondent’s memory starts to fade except to remember that the next few hours involved a lot of food and wine! The truly great thing about this event is the bond created by a weekend of sailing challenges. All manner of boats took part in the race from “Liskana” a SeaRay 31 speeding bullet with two 7.5l engines which completed the crossing to Smir in less than an hour to the “St Christopher” an 8m sailing boat that arrived 13 hours later with divine intervention from its namesake!

On Sunday morning the first departures started, some back to Gibraltar and others like the Boatshed Gibraltar yacht to Ceuta. Sunday provided the toughest conditions with heavy seas in the Straits and the wind averaging force 6 and peaking to force 7. The crew of the “Andrea Noveno” breathed a sigh of relief as they eventually shot into Ceuta harbour ahead of a ferry which also seemed in a hurry to find shelter. Ceuta Marina is worth a visit, it’s friendly, free of bureaucracy and welcoming. Ceuta is similar to Gibraltar with the entire peninsula small enough to be accessible on foot.

By Monday morning the wind had abated to a force 4 or 5 and we romped back to Gibraltar in the company of our dolphin friends. At Marina Bay the friends who had counted us out counted us back in.

Special thanks to the “Albany Boys” and all their helpers you worked so hard to make this such an enjoyable, challenging but safe experience for everyone.

It was a great weekend and if you want to take part next year whether on an 8m sailing boat, a speeding bullet or a luxury cruiser Boatshed Gibraltar Boats for Sale has them all and can advise you on all aspects of yacht ownership. 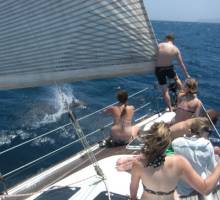 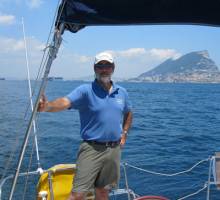 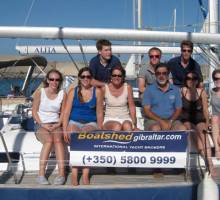 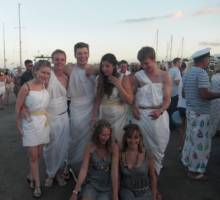 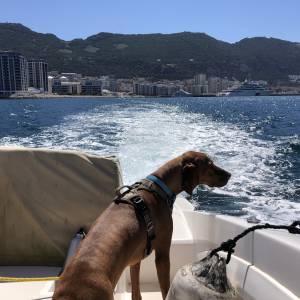