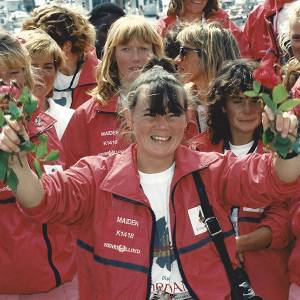 Tracy Edwards with crew of Maiden

Today it is not unusual to see women skippering ocean going yachts. Think of people like Dee Caffari, Ellen MacArthur and many others. It wasn’t always so and girls on boats, even to some extent today, are associated with the roles of galley slave or “hostie”. You need to wind the clock back to the mid 1980s to understand that yachting and in particular ocean racing was the exclusive preserve of alpha males until Tracy Edwards burst onto the scene.

The story of Tracy Edwards is told in the documentary “Maiden”. Maiden was the name of the yacht that Edwards acquired, fitted out and entered into the 1989-90 Whitbread Round the World Yacht Race with an all girl crew. The story is told with candour, reflection and humour. Newspaper hacks at the time called Maiden a “tin full of tarts”. They did not expect, and said as much in print, that Maiden would make it past the Needles never mind to cross the Atlantic and make it to Punta del Este in Uruguay on the first leg of this gruelling race.

It was a massive shock to the male yachting fraternity at time to discover that an all girl crew managed to come in second overall in the race in their class AND first in the toughest leg of the race between Cape Town and Auckland. Edwards took Maiden the furthest south into the frigid waters of the Southern Ocean descending into the Screaming Sixties where they experienced gusts of more than 90 knots and waves of up to 20 metres in height.

When they eventually sailed up the Solent on the final leg just hours behind the overall winner they were greeted with a welcome the like of which had never been seen before. The girls had shown what they were made of steel.

One of the particularly moving aspects of this documentary are the interesting juxtaposition of old footage and current interview material of the crew and especially of the journalists as they do a “mea culpa” and recognise how unfair their coverage had been at the time.

I strongly recommend you see the documentary. Maiden is not about token feminism. Edwards never framed her challenge in that way. She just wanted to be a pathfinder for the hundreds of female ocean racers who have followed her. When you sit down to view it at the cinema or on Netflix or Apple TV be sure to have your partner, wife, daughters and granddaughters with you. It’s an inspirational movie for girls AND boys! Ah yes and don’t forget to have some tissues handy.