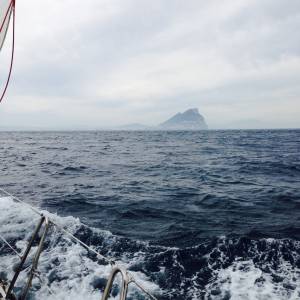 Heading home on the last leg

Some of the countries on southern rim of Mediterranean are in a state of upheaval. The headlines give the impression of an arc of fire, chaos and danger. Having visited Morocco many times over the last few years I have never found it to be anything but hospitable and exciting in equal measure.

Any cruise of the Moroccan Med coast should start at either of Spain's two city enclaves at either end of the coast, Ceuta and Melilla. Ceuta is 12nM virtually directly south of Gibraltar and Melilla 70nM south of Almeria. These two start points provide a gentle introduction to North Africa. Culturally they are a fusion of Europe and North Africa - order and disorder fighting for your attention.

An overnight passage across from Almeria to Melilla will ensure that you arrive at an unfamiliar port in daylight. Melilla has a medium sized marina with the cheapest daily berthing rates anywhere in Spain or Morocco. The marina is located within a large harbour which is shared by the Moroccan port of Nador and the enclave of Melilla. The marina is a 10 minute walk from the city centre.

In April I spent 10 days cruising along this coast. We were lucky to encounter cloudless and moonless skies. The sky was lit up with countless stars. We took down the Bimini top to better appreciate the view. The only things that were brighter were the phosphorescent trails of dozens of dolphins who kept us enthralled throughout the night. In the morning as the sun rose they leapt with joy. If you think I'm exaggerating then look at this online: http://youtu.be/8hs_RYeKE7c

Two to three days will be enough to clamber over the ramparts of the Melilla citadel and learn about the multiple sieges it endured in its bloody history.

The next port on this rugged coast is Al Hoceima a big fishing port with an infrequent ferry service to the Spanish mainland port of Motril. There is no marina here and you will have to lie against the inner harbour wall. This port is not accustomed to receiving yachts. You will get visited by multiple agencies of the Moroccan government, the Gendarmerie, Douanes, Police, Port Authority and maybe even the Royal Moroccan Navy. They are all welcoming and curious but one can't help thinking that one single photocopier would cut down on the repetitive form filling. It's clear that it's me who hasn't understood "the way things are done" here! Al Hoceima merits an overnight stop enough to sample one of the restaurants that are perched on the cliff tops overlooking the harbour. From there you can keep a comforting watch on your yacht as it bobs up and down in the gentle swell.

Some fifty miles further up the coast is the fishing port of El Jebha. This is not a port of entry to Morocco so you can only arrive there if coming from another Moroccan port. El Jebha was connected to the electric grid just a few years ago. This is going to be a unique experience. There is no marina, only one Gendarme and lots of friendly fishermen who only see three boats like yours in any year. Tie up alongside an orange fisheries protection vessel that has not been to sea in years. On the shoreline just outside the harbour you will be rewarded with the best grilled sardines at a beach bar that serves no alcohol! It's a magical place but don't expect any of the luxuries that have made western societies so weak and fat!

Your next and final stop on the way to Ceuta is Port Smir. This is a modern marina with all the facilities you might require. Your patience may be tested by "the way things are done here" but press on as this is the gateway to Tetuoan the old capital of Spanish Morocco. Tetuoan is a 20 minute taxi ride away and merits a visit. You will need a guide. Negotiate a price up front and tell him what you want so that the guide doesn't take you where he wants. The souk is the ideal spot to stock up on fresh supplies of every kind. There are no frozen chickens here, chose one and you'll witness its demise! Expect to bargain on everything. Those who do not succeed in lowering initial prices by at least 30% are being had. Haggling is a national sport but remember to treat everyone with the respect you will undoubtedly receive. Reserve at least two days for the Port Smir experience before departing for a two hour sail to Ceuta. Ceuta is a smaller but very similar place to Melilla with the yacht marina a 5 minute walk from the city centre. There are some great restaurants and bars and a water park to keep any children amused for hours.

On the 12th June a fleet of nearly 40 boats leave Gibraltar on the annual Ocean Village/Boatshed Gibraltar Yacht Rally bound for Port Smir. It's open to all boats and could provide a great way to start your Moroccan Mediterranean coastal cruise. You'll find all the information you need under the "events" tab here: Facebook.com/boatshedgib. 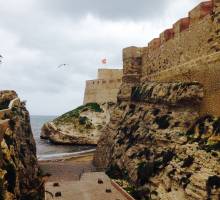