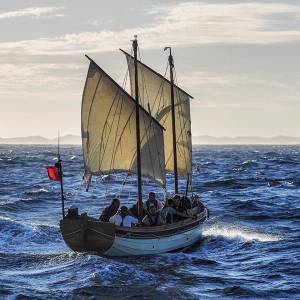 Some of you may have seen the Channel 4 programme “The Mutiny” recreating the astonishing voyage of Captain Bligh from near Tonga to Batavia (modern day Jakarta) a journey of some 4,000 miles. If you caught it you will know that the participants in the recreation pushed themselves to the limits of their physical endurance but psychologically they must have been comforted to know that they were escorted by a much larger vessel complete with medical facilities. No such comfort was afforded to Bligh and his men.

Imagine the anguish as Bligh and his 18 loyal crew members were forced at gunpoint onto the Bounty’s 23 foot (7m) jolly boat. They were provided with 5 days provisions, water, a sextant, nautical tables and charts. Once they were aboard and just before they were cast off four cutlasses were dropped into the boat.

They were to be alone in poorly charted waters in a boat not designed for open water passages and which only had a freeboard of 5 inches! Bligh was by all accounts a bully but there is little doubt that he was also an excellent navigator. His mentor had been none other than Captain Cook who had opened up Australia and New Zealand and charted their coasts and that of many South Pacific islands.

At 10:00 on the 28th April 1789 the warps holding the jolly boat to HMS Bounty were cut; their odyssey was about to begin. Bligh hoped to find water and food on Tofua, 35 miles from where he was cast adrift, and then proceed to the nearby island of Tongatabu to seek help from Tongan King Poulaho (whom he knew from his visit with Cook). Ashore at Tofua, there were encounters with natives who were initially friendly but grew more menacing as time passed. On 2 May, four days after landing, Bligh realised that an attack was imminent. He got his men back on the boat shortly before the Tofuans seized its stern rope and attempted to drag it back ashore. Bligh managed to defend his shore party and their supplies from the boat. However, in attempting to free the rope from its captors, the quartermaster John Norton leapt into the water and he was immediately set upon and stoned to death.

Shocked and saddened by the violent death of one of their number the crew pulled out to sea and re-evaluated their options. A visit to Tongatapu, or any island landfall, might incur similarly violent consequences; their best chance of salvation, Bligh reckoned, lay in sailing directly to the Dutch settlement of Kupang in Timor using the rations presently on board. This was a journey of some 3,500 nautical miles to the west, beyond the Endeavour Strait, and it would necessitate daily rations of an ounce of bread and a quarter-pint of water for each man. The plan was unanimously agreed.

From the outset, the weather was wet and stormy, with mountainous seas that constantly threatened to overwhelm the boat. The jolly boat made the first ever passage by Europeans through the Fiji Islands but they dared not stop because of the islanders' reputation for cannibalism. On 17 May, Bligh recorded in his journal that "our situation was miserable; always wet, and suffering extreme cold ... without the least shelter from the weather".

A week later with the skies clearing, birds began to appear, signalling a proximity to land. On 28 May, the Great Barrier Reef was sighted; Amazingly Bligh found a navigable gap and sailed the boat into a calm lagoon. Late that afternoon, he ran the boat ashore on a small island which he named Restoration Island where the men found oysters and berries in plentiful supply and were able to eat ravenously. Over the next four days, the party island-hopped northward within the lagoon, aware that their movements were being closely monitored by natives on the mainland.

On 2 June, the boat cleared Cape York the extreme northern point of the Australian continent. Bligh turned south-west, and steered through a maze of shoals, reefs, sandbanks, and small islands. The route taken was not the Endeavour Strait, but a narrower southerly passage later known as the Prince of Wales Channel. That evening they reached the open Arafura Sea - still 1,100 nautical miles from Kupang. The following eight days encompassed some of the toughest travel of the entire journey and, by 11 June, many were close to collapse. The next day, the coast of Timor was sighted: "It is not possible for me to describe the pleasure which the blessing of the sight of this land diffused among us", Bligh wrote. On 14 June, with a makeshift Union Jack hoisted, they sailed into Kupang harbour.

In Kupang, Bligh reported the mutiny to the authorities, and wrote to his wife: "Know then, my own Dear Betsey, I have lost the Bounty ..." On 20 August, the party departed for Batavia (now Jakarta) to await a ship for Europe.

Surely this feat of leadership, navigation and toughness merits its categorisation as one of the most Astonishing Small Boat Voyages ever. If you want to have an astonishing adventure of your own, start by looking for the right boat at www.boatshedgibraltar.com.