Boatshed Gibraltar
A Jewel in the Atlantic and a Marine Engineer in Lederhosen.
Wednesday, 28 September 2016

A Jewel in the Atlantic and a Marine Engineer in Lederhosen. 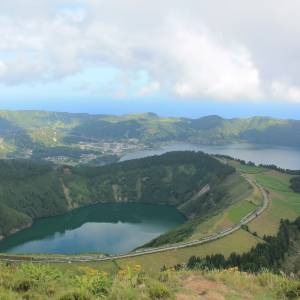 After seven days at sea we have arrived at the port of Ponta Delgada on the island of Sao Miguel, Azores. It’s been exhausting to be on emergency tiller for nearly 400 nautical miles. I had been looking forward to doing some sightseeing but before that I needed to make contact with the marine engineer who would replace the steering cable and the autopilot drive pin that had sheared. I had already had a short conversation with him by sat phone to explain that we would arrive on Sunday afternoon and he told me he would be along to see us on the Monday afternoon. He arrives on time as promised. He is German. He arrives wearing lederhosen which seem out of place but on reflection looking at the confined space he is about to climb into to examine the steering system I reflect that it’s the only material that won’t easily rip. The problem is quickly diagnosed. When Mike, one of my crew and a chartered mechanical engineer, gives a brief analysis of the cause of the problem the German gives him a withering look that says “another theoretician”!

With the engineer promising to come back on Thursday with the parts to effect the repair we are left with three/four days to clean, deal with small repairs and most importantly go sightseeing before Kim and Mike leave Ponta Delgada for London and Lisbon at the weekend. The first thing you learn about the islands is that they sit on the mid-Atlantic ridge and were created by volcanic activity. Millions of years of erosion have turned them into green fertile islands but the evidence of volcanic activity is everywhere. The landscape is one big amalgam of joined up calderas. The most impressive caldera or crater is Lago de Fogo (Fire Lake). It’s a deep fresh water natural lake inside a massive crater. It provides water for most of the island. It’s certainly worth a visit. On the way down from the lip of the crater you pass a geothermal power station that provides clean natural energy for the island. At a place called Furnas (literally ovens in Portuguese) there is a caldera where spring water boils at the surface. Some local restaurants use the geothermal heat to cook a local stew which is buried in the ground and recovered 3/4 hours later. It’s quite an experience. Nearby you’ll find the beautiful gardens of Terra Nostra. Not only are the gardens laid out with beautiful plants brought to the Azores by intrepid Portuguese explorers but within the gardens there is a massive (150m diameter) round pool/pond fed by hot spring water. The water is brown with dissolved iron oxides so be sure to bring only dark coloured towels. The experience verges on the decadent. It’s a pity that some members of Citadel’s crew overdid the drinking the previous evening and are keener to sleep in the shade than bathe in a pool fed by natural hot springs.

The following day we get to explore Ponta Delgada. Kim has been reading her guide book and insists that we visit the Palacio Fonte Bela a stately palace once belonging to the Barao de Fonte Bela. On arrival we are disappointed to discover that it’s been converted into a school but it’s vacation time and the caretaker, a kindly man, seeing our disappointment and encouraged that we speak some Portuguese volunteers to give us a guided tour of the building. As luck would have it this caretaker really knows the history of the palace and gives us a personalised tour that could not be matched by any tour guide. We visit the courtyards, library (amazing), the biology lab with a collection of stuffed animals to match some of those to be found in the best natural history museums. As we leave the school we are grateful to Kim for her insistence and especially to the caretaker.

Later that afternoon Kim and I go to the Ponta Delgada Military Museum. Kim knows how to manage Dad and the museum is just up my street. It’s not just about weapons. There is a story to learn about early trans-Atlantic flying and the role these island played in opening up the Atlantic route and the vital role that the islands played providing a base for Allied anti-submarine aircraft. Kim eventually gets bored and drags me away before I have had my fill.

Before we know it the weekend is here and its time to bid farewell to Kim and Mike. On Monday Rob and James join us for a cruise west to Faial and Pico some 120NM to the west. I’ll cover what’s known as the Central Group islands in the next instalment.