400 Miles on the Emergency Tiller. 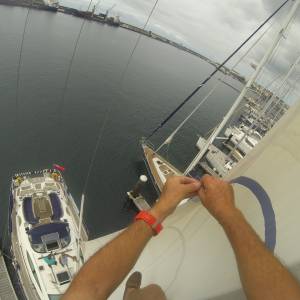 A trip to the Azores 1000nM away from Gibraltar has been on my bucket list for the last three years. Every yachtsman who has ever been there tell me of the natural beauty of the islands and the friendliness of the islanders so on the 1st Aug Citadel with a crew of five (including my brave daughter Kim) slipped out of her berth at Queensway Quay Marina and headed west out of the Straits into a freshening SW breeze. With short tacks off the northern side of the Straits to keep clear of the Traffic Separation Zone we were soon heading out past Barbate and a first comfortable night at sea. The following afternoon we picked up the NE trade winds and headed out towards and beyond Cape St. VIncent. This was to be the worst night of all the 15 nights that in total we spent at sea. The wind increased to 25 and sometimes 30 knots and the seas were very confused with waves of up to 4/5 metres in height. We were getting wet and the boat was slamming with such force into the seas that at times I feared she would come apart. The following day conditions improved and we were once again moving in reducing wind and seas. A late breakfast with bacon butties banished that green feeling and no one was ever sick again all the way to Ponta Delgada.

Drew suggests later that day that with the reducing wind we need to break out the brand new gennaker that I had made for the trip. The route to the Azores generally takes one through a band of Portuguese North Easterly Trade Winds that slowly peter out as one closes the islands and come under the influence of the Azores High. The gennaker is soon up and we power on at over 7 knots in an apparent wind of just 12 knots. My decision to purchase the gennaker is vindicated. Later that day disaster strikes. The auto helm stops working and we are now facing at least 3 days of manual steering. Manual steering when there are five crew members is not too onerous although it means that the person on the helm generally ends up with a cold meal as the other four tuck in. We enjoy helming in beautiful conditions. Mid-Atlantic Spotted Dolphins make an appearance and put on an aerobatic display of stunning elegance. It feels good to be out here. Citadel is behaving well. Then 24 hours after the auto helm packed up we start hearing noises from the steering system. We prepare for the worst and locate the emergency tiller. Two hours later the steering cable finally parts. We quickly install the emergency tiller and then also quickly discover that tiller steering a boat that weighs over 20 tons requires a lot of strength. We are now down to two watches of two because helming is so strenuous it is close to impossible so Kim takes on the invaluable role of keeping us fed and awake. When I come back on deck after my rest period I discover that the "on watch" team have devised a jury steering system using the two wheels and some old webbing. It certainly improves the handling but it still requires strength and is counterintuitive as the jury rig moves the boat in the opposite direction to which it would with functional wheel steering. It's an improvement and that's what we need. We consider a diversion to Madeira 175nM to the south but on advice from MeteoGib, who are providing a weather routing service, we decide that conditions on the 375nM left to the Azores are more benign. It was a good decision to take the routing service from MeteoGib and another good decision to go with their advice. The invaluable Yellow Brick tracker/communications device enabled us to stay in contact.

A further two but very trying nights and on the third night we catch the loom of the lighthouse at Ponta do Arnel on the island of Sao Miguel. The morning reveals a large island with a tablecloth cloud not dissimilar to Gibraltar's levanter cloud. The temperature is cooler so the humidity is not oppressive. A few hours later and 30 minutes before our ETA I call the marina on the VHF to ask to not be obliged to go to the reporting berth and instead asking to go direct to an "easy" berth. I also ask for assistance with lines. I understand we have arrived in a place that lives at a different pace when the marina manager tells me that in 15 minutes they shut for lunch so they cannot help! We make it in with no external help. It's good to be ashore and heading for showers!

Next month I'll tell you about the Azores - a set of nine jewels in the North Atlantic. In the meantime you can see a short video of the trip below 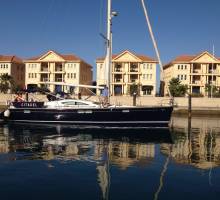 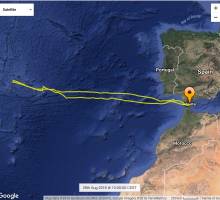